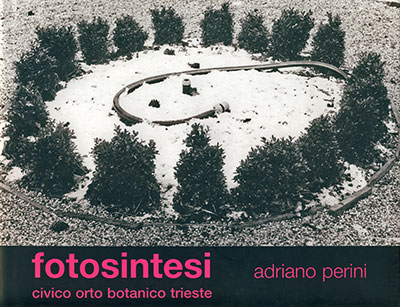 Photosynthesis is a fundamental chemical process in which plants, when under the effect of light, inorganic compounds, water and carbon dioxide  are transformed into organic compounds, components of living matter.

Photography is also a chemical process,  as the “Gazete de France” newspaper reported on the 6th January 1839 “It is remarkable.  All the scientific theories of light and optics are questioned, and it will revolutionize the art of drawing. M Daguerre has found a way of fixing the images which paint  themselves within a camera obscura….”

Transformations are therefore processes whose constitutive elements are hard  to perceive, because they are impalpable and they fascinate us. The photographic story that Adriano Perini has created in Trieste’s Botanical Gardens represents a happy synthesis to these processes where the amenity of nature is expressed, and the emotions conveyed.

Nature in fact represents one of the closest subjects to our imagination, due to its never ending ability to change and become so similar to the life which man has always questioned.

Perini succeeds in moving within this context thanks to his great experience he acquired in his previous work, aware of the right balance between precise composition and interpretation, both of buildings and of green architecture, as he himself defines.

By taking a bit more liberty each day, after a long winter, the green spring re appears and we are invited to sit on a bench to savour nature that is surfacing, and that will become predominant with summer.  Ornamental plants, lotus flowers, magical plants, food plants, shrubs, one after another  in the photographs reduce the gap between the real garden and that of our imagination.

No deception. In fact the frequent use of diffused light, is seemingly timeless, because the photographic moment itself makes that moment unrepeatable and at the same time gives the image the ability to represent the cycle of the seasons and the transformations that follow.

The presence of contrasting light must not lead us to consider the shadows as areas of neutral value, but elements to be portrayed containing what wants to be hidden in order to make what is shown in full light even more prominent.

Everything in a landscape lives within an atmosphere marked by changeable beats of light. Each nuance contains the magic that is connected to each shrub, plant, leaf, flower in nature. The small transformations of one influence the development of another one and consequently the development of the entire system.

Perini’s elegant and attentive eye takes us however to another context, that goes beyond scientific rigour, along a more literary pathway. Isn’t this also within the spirit of a botanical garden, to stimulate knowledge of different vegetation, causing nature to reveal other charms to us?

The small alleys, sunny armchairs, corners of luxuriant vegetation that give us emotions of Chekhovian traits and we imagine  a dualism defining the good and the bad within precise borders.

The story is transformed into a journey when we meet  refined tubs of lotus flowers and aquatic plants:   the fascination of the East suddenly materializes.  The thought moves to the  colour tones of Claude Monet’s water lilies.  These photographs  however confirm that black and white  isn’t a parentless writing of colour but rather an autonomous language able of representing the synthesis between form and interiority.

Robert Doisneau wrote about images in Versailles, created by Jacques Dubois “….I was convinced that the best images let themselves be taken by untutored poachers….Jacques Dubois and his pictures of Versailles make us think again about this……divided between the wonder of picturesque erosion and the geometric rigor that refuses any poise, we need to choose, or measure the mix with love.  The decision is here”.

Without neglecting his own refined photographic vision, Adriano Perini leads us within this revealing landscape, successfully measuring out the story and lyric.  It is up to us to continue watching nature with this double glance,  the only one that allows us to feel an integral part.